This month we celebrate the Queen’s Platinum Jubilee. She is the longest reigning monarch in British history. Up until recently she attended church every week and still did a full week’s work at the age of 96!

It is her commitment to serving God and the nation which stands out in her life. Even before she became Queen, she made a promise, which she has kept for over 75 years: ‘I declare before you all that my whole life, whether it be long or short, shall be devoted to your service’ (21st birthday broadcast, 21 April 1947).

What is the secret of the Queen’s consistency of character and service? In 2002 she said this: “I know just how much I rely on my faith to guide me through the good times and the bad. Each day is a new beginning. I know that the only way to live my life is to try to do what is right, to take the long view, to give of my best in all that the day brings, and to put my trust in God.” These are wise words from somebody who draws her strength from the Christian Faith and can inspire all of us who want to make our lives count!

The Queen has been an example of joyful, wise, and generous service on behalf of others all her life. Six months before her coronation she asked the nation and Commonwealth to “pray that God may give me wisdom and strength to carry out the solemn promises I shall be making, and that I may faithfully serve Him and you, all the days of my life.” Paul urges us to pray for all in authority, “that we may live peaceful and quiet lives in all godliness and holiness.” (1 Timothy 2:2).

Would you have liked to go to Cyprus on holiday this year? If so, spare a thought for the Cypriot who played such a key role in the New Testament.

He was Joseph, a Jewish Cypriot and a Levite, who is first mentioned in Acts 4:36, when the Early Church was sharing a communal lifestyle. Joseph sold a field and gave the money to the apostles. His support so touched them that they gave him the nickname of Barnabas, ‘Son of Encouragement’.

Barnabas has two great claims to fame. Firstly, it was Barnabas who made the journey to go and fetch the converted Paul out of Tarsus, and persuade him to go with him to Antioch, where there were many new believers with no one to help them. For a year the two men ministered there, establishing a church. It was here that the believers were first called Christians.

It was also in Antioch (Acts 13) that the Holy Spirit led the church to ‘set aside’ Barnabas and Paul, and to send them out on the church’s first ever ‘missionary journey’.  The Bible tells us that they went to Cyprus, and then travelled throughout the island. It was at Lystra that the locals mistook Barnabas for Zeus and Paul for Hermes, much to their dismay.

In England there are 13 ancient church dedications and not a few modern ones. Barnabas the generous, the encourager, the apostle who loved his own people – no wonder he should be remembered with love.

Trying to explain the doctrine of the Trinity has kept many a theologian busy down the centuries.  One helpful picture is to imagine the sun shining in the sky. The sun itself – way out there in space, and unapproachable in its fiery majesty – is the Father. The light that flows from it, which gives us life and illuminates all our lives, is the Son. The heat that flows from it, and which gives us all the energy to move and grow, is the Holy Spirit. You cannot have the sun without its light and its heat.  The light and the heat are from the sun, are of the sun, and yet are also distinct in themselves, with their own roles to play. 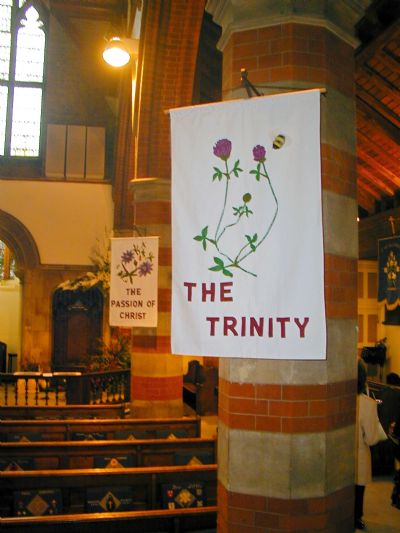 The Bible makes clear that God is One God, who is disclosed in three persons:  Father, Son (Jesus Christ) and Holy Spirit. For example:

Genesis 1:1-2: ‘In the beginning God created…. and the Spirit of God was hovering…’

Luke 24:49 actually manages to squeeze the whole Trinity into one sentence.  Jesus tells His disciples: ‘I am going to send you what my Father has promised; but stay in the city until you have been clothed with power (the Holy Spirit) from on high.’

In other words, the sun eternally gives off light and heat, and whenever we turn to its brilliant light, we find that warmth and life are there as well.

Evelyn Underhill was an English Anglo-Catholic writer, poet and novelist. She is known for her numerous writings on religion and spiritual practice. Underhill was born in Wolverhampton in 1875, and during her lifetime published 39 books and more than 350 articles and reviews.

She married Hubert Stuart in 1907. Together they travelled regularly to Switzerland, France and Italy, where she pursued her interests in art and Catholicism and visited numerous churches and monasteries. She pursued a daily routine that included writing, research, worship, prayer and meditation.

During the First World War Underhill worked at the Admiralty in the naval intelligence (Africa) department. In 1921 she became an Anglican and later changed her views about conflicts and in 1939 she became a Christian pacifist.

From 1924 she became widely respected as the creator of Anglican retreat houses in the UK. Her first was at Pleshey, a small village in Essex. These were havens of peace and prayer where many drew closer to God; sought His will for their lives and found renewed strength on their return home. Underhill also believed that retreat attendees should be warm, comfortable and well-fed as their physical well-being was just as important as their spiritual needs.

In her 50s, her writings became more focused on the Holy Spirit, and she became a prominent figure as a lay spiritual director, guest speaker, radio lecturer and a proponent of contemplative prayer.

In the UK, USA and Canada, the third Sunday in June is Father's Day. It’s usually a good time for sons and daughters to take their father to his favourite restaurant, or to watch a favoured sport, or whatever else he enjoys doing.

How will you celebrate it this year? If your own father cannot be with you, how about a Zoom meeting?

How do these special days ever get started, anyway?   Well, Father’s Day began because way back in 1909 there was a woman in Spokane, Washington, named Sonora Louise Smart Dodd. That year she heard a church sermon about the merits of setting aside a day to honour one's mother. Mother's Day was just beginning to gather widespread attention in the United States at this time. But Sonora Louise Smart Dodd knew that it was her father who had selflessly raised herself and her five siblings by himself after their mother had died in childbirth. So the sermon on mothers gave Sonora Louise the idea to petition for a day to honour fathers, and in particular, her own father, William Jackson Smart.

Sonora Louise soon set about planning the first Father's Day celebration in Spokane in 1910. With support from the Spokane Ministerial Association and the YMCA, her efforts paid off, and a ‘Father’s Day’ was appointed. Sonora Louise had wanted Father’s Day to be on the first Sunday in June (since that was her father's birthday), but the city council didn't have time to approve it until later in the month. And so on 19th June, 1910, the first Father's Day was celebrated in Spokane.

Gradually, other people in other cities caught on and started celebrating their fathers, too. The rose was selected as the official Father's Day flower. Some people began to wear a white rose to honour a father who was dead, and a red one to honour a father who was living. Finally, in 1972, President Richard Nixon signed a presidential proclamation declaring the third Sunday of June as Father's Day - a permanent, national holiday.

On 22nd June the Church remembers St Alban, who was put to death on that day in 250 AD, on the site of the town in Hertfordshire that now bears his name and has a splendid cathedral which houses his shrine.

Christianity was struggling to survive in third century Britain under Roman rule. In the middle of the century there were two periods of specific and ruthless persecution. During one of these Alban, who was not a Christian himself, gave shelter to a Christian priest who was being hunted down by the authorities.

During his stay with Alban the priest greatly impressed him with the depth and integrity of his faith, and he sought instruction and then baptism. Eventually, however, the soldiers tracked the priest down and he would have been taken away and killed.

Alban, however, put on the priest’s robes, so that when the soldiers arrived they assumed that he was their prey. The priest was able to continue his ministry, but Alban was taken away, interrogated and eventually charged with promoting a banned religion. All through, he refused to say anything that could implicate anyone else, but (according to an account by the Venerable Bede) boldly confessed his faith in Christ. He was tried, sentenced to death, and executed.

He is widely recognised as the first British martyr, though two Christians were martyred in Wales during the same persecutions. Alban’s body was buried near the site of the present town and later became a major place of pilgrimage.

John the Baptist is famous for baptising Jesus, and for losing his head to a woman. He was born to Zechariah, a Temple priest, and Elizabeth, who was a cousin of Mary, the mother of Jesus. John was born when his mother was advanced in years, and after the foretelling of his birth and the choice of his name by an angel, we hear nothing more of him until he began his mission of preaching and baptising in the river Jordan c27.

John was a lot like an Old Testament prophet: he lived simply on locusts and honey in the wilderness, and his message was one of repentance and preparation for the coming of the Messiah and His Kingdom. He went on to baptise Jesus, at Jesus’ firm request.  When John went on to denounce the incestuous union of Herod Antipas with his niece and brother’s wife, Herodias, he was imprisoned and eventually beheaded at the demand of Salome, Herodias’ daughter.

John is the only saint to be remembered three times in the Christian calendar, in commemoration of his conception, his birth (June 24), and his martyrdom. When John saw Jesus he said that Jesus was the “Lamb of God”, and he is the only person to use this expression of Jesus. In art John is often depicted carrying a lamb, or with a lamb near him.