Every month, for 116 years, this church has produced a Christian publication for its parishioners. Originally it was called the Ilford Parish Magazine and provided news and information about the life of St. John’s. No less than 1,750 copies were distributed in January 1908 and over 100 people acted as distributors!

Over the years, the magazine was produced in different sizes with varying content and included advertisements for numerous commodities and local businesses. For a time the publication was called Parish News and late renamed St. John’s Parish Magazine. Later, it would be called Pilgrimage the name it has today.

At the end of 1938 a total of 575 copies of the magazine were distributed per month, and it was calculated that one house in seven in the parish received the publication. During the war years there was a decline in readership and this began to put a strain on the finances to produce it. In April 1945 the magazine was made smaller in size and content but retained the two main inserts: the Essex Church News and Home Words - Anglican publications of mainly church news from around the country. 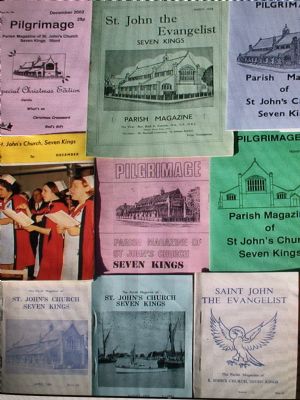 In the 1940s an insert Weekday Pages for Women   with Homes was added - a non-religious publication   that gave women practical tips for looking after   the home and family. Another insert called The   Sign was also introduced featuring items of   general interest with pictures. Eventually Home   Words and the Essex Church News were   discontinued to reduce costs.  In July 1958 the   magazine was given a dramatic new style when it   changed from A4 size to a handy, pocket size,   format. On the cover was a drawing of an eagle, a   symbol for St. John.

With regard to the content, the magazine   regularly included detailed reports and news of   activities from the Parochial Church Council, the Mothers’ Union, the Choir, 2nd Seven Kings Scouts and Guides, the Women’s Club and the Organ Memorial and Restoration Fund Committee. There were Bible notes from Scripture Union; a study on the Lord’s Prayer; a History of the English Bible and a lighter series about holiday experiences!

From May 1957 the vicar, Rev. Basil Cornish began writing a column for children. It was called Children’s Corner and he signed himself Your honorary, Aunt Ann. This series continued for a number of years containing stories, competitions, prayers and Christian instruction. Rev. Cornish also started a new series called Folk in the Pews featuring short biographies about long-standing church members.

From June 1966 there were, in many editions, a series of articles containing questions and answers on various aspects of the Anglican Church and the Bible. Topics included Christian symbols, church government, prayers, the Prayer Book and explanations for difficult verses of Scripture. During this decade there was special emphasis on reports of church events and services, along with news about people. By 1969 rising printing costs brought about the need for a ‘home-made’ magazine. A colourful, pictorial cover produced by Mowbray was used but all the other work on this publication was undertaken locally and voluntarily. The long-standing inclusion of commercial advertisements was discontinued in 1975. The number of subscribers to the magazine had now fallen to 260.

In the 1970s an A5 size magazine was introduced and remained as such for the next five decades. In 1980 it was decided to discontinue with the Mowbray picture covers. In July of the following year, the magazine was given a new name. It became Pilgrimage. The name was chosen by Miss K. Benny, who at the time was secretary of the Bible Reading Fellowship at St. John’s. She pointed out that the Bible describes us as God’s people, called to live as pilgrims in the world, looking for the heavenly city which is to come.

In September 1995 a new regular feature appeared in Pilgrimage called People in Profile. This was introduced to help parishioners discover a little more about each other. Over the next three years, forty people contributed to this monthly series. They were all church members except for Bishop Roger Sainsbury (March 1996) and the popular crime writer P.D. James (August 1998)! 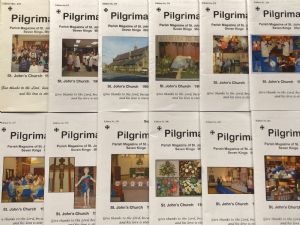 Over the last 20 years, the computer has greatly assisted the compilation of Pilgrimage, not only by speeding up the production process but also by improving its appearance – particularly with graphics and occasional photographs, some in colour. Handwritten articles were soon discontinued and sent to the editor by email. The Internet also provided suitable material from Christian websites. During this time, editions contained 24 or 28 pages. In 2015 this was reduced to 20 pages each month with the exception of the Christmas edition (28 pages).

In 2016, the old duplicator which used stencils was replaced with a printer connected to a computer. Copies no longer had to be prepared with a team of page collators and staplers! The magazine was prepared digitally by the editor and sent by email for the computer / printer to assemble the pages and staple. Photographs were now clearer and could be printed in colour, although many (to save costs) were printed in monochrome. Sometimes the text and graphics were in colour and enhanced the appearance of the magazine.

Through the decades, the main purpose of our magazine has been to include announcements of forthcoming services and meetings; reports on church activities and news about members. In more recent times there has been an added emphasis of: Bible-related articles; prayers; occasional reports e.g. from PCC, Book Group, Peace and Justice Group, Mothers’ union; church news from around the country; a children’s page plus a variety of quizzes, puzzles, competitions and jokes! 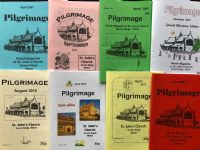 Over the years countless people have contributed to the magazine’s content and its production. During the life of St. John’s, eight of our vicars have acted as editors for all or for a part of their time in post. Our editors since the 1940s:

In the early part of 2020, the church had to close due to the Coronavirus pandemic. It was no longer practical to produce the magazine or circulate it to members. Also, there was very little news to report! The last edition of Pilgrimage was for April 2020. It is hoped that a new publication will be produced when the church opens for regular use in 2021.