St. John’s church has a fine number of stained glass windows. They are very ornate with intricate detail and were installed at a time when this form of artistry was popular, and regarded to be suitable and permanent enhancements to a sacred building.

Before 1989, the floor of the Chapel Room was higher than it is now and formed the Lady Chapel. A  small altar was in position under the east window but now the main features from the original Lady Chapel are the colourful stained glass windows. 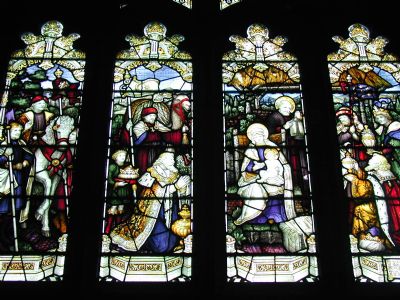 The East Window depicts The Nativity of our Lord and was made by C. Kempe and Co. Ltd of No.28, Nottingham Place, London.

Charles Eamer Kempe was born on 27th June 1837. He wanted to become a clergyman but a severe speech impediment prevented him from pursuing this ambition. Instead he decided to use his artistic talents to  decorate church buildings. He was particularly drawn to artistry with glass. His first recorded stained glass window design was installed in Gloucester Cathedral in 1865. The following year Kempe set up his own studio in Beaumont Street, Cavendish Square, London and in 1888 moved the studios and offices to Central London. By the end of the century he was employing over fifty people.

Between 1895-1905 Kempe’s work was much in demand and its popularity culminated in a commission to produce a window of St. George for Buckingham Palace. Following wartime damage and its restoration, the window can now be seen in the Ely Stained Glass Museum in Ely Cathedral.

Today, the work of Kempe's Studio can still be seen in many Cathedrals and Parish Churches in the U.K and abroad, particularly in North America.  A characteristic of Kempe windows is the insertion of a small wheat-sheaf, taken from the Kempe family coat-of-arms, to sign his work, and this can be found in the bottom left hand corner of the east window.

This window, with its four lights depicting the birth of Christ, was donated by Selina Winter (who laid the  foundation stone of this church in 1902) as a memorial to her parents-in law. Their names, Robert Totman Winter and Agnes Maypowder are displayed in the bottom right corner with the dates 1879 and 1854. The window was dedicated on Saturday 7th November 1908. 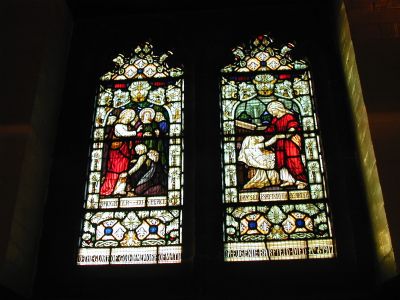 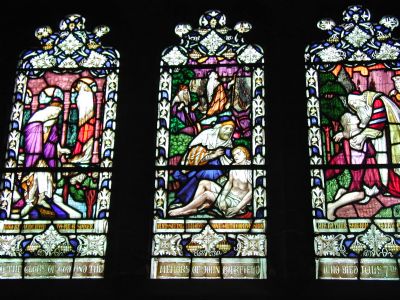 The left window (upper photo) shows Jesus healing the woman with a haemorrhage and raising the daughter of Jairus. The central window (lower photo) depicts a Repentant Tax-collector, the Good Samaritan and the Prodigal Son.

The Pye window on the far right of the south wall is dedicated to the memory of Mrs Elizabeth Jane Pye who died on 16th October 1932 aged 71. The central light depicts Jesus carrying a child with other children being brought to Him by two women on either side. 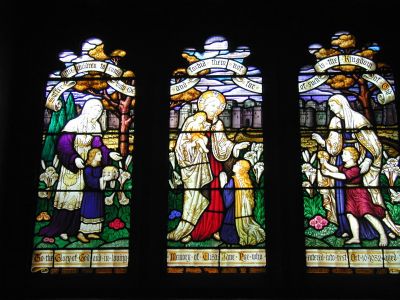 Elizabeth Pye and her husband Alfred were responsible for the business side of producing the church magazine. They were residents in Pembroke Road, Seven Kings and were married for forty years. Alfred Pye was a P.C.C. member from 1920-25. At the end of his life in 1939 he was an air-raid warden. The dedication of the Pye window was undertaken by the vicar of St. John’s, Rev. Hamish Gray during evensong on 24th June 1934.

The stained glass windows beneath the large West Window in the Worship Area, forming the Sanctuary, were originally part of the baptistery. The font was moved during the church development of 1989-90. The  window on the right is known as the Hough Memorial Window and dates from 1931.

Samuel Hough was an accomplished leader and highly regarded for his work in the church. In 1904 he became church warden and assisted our first vicar Rev. Peabody. Although Samuel Hough was a member of the choir and a Lay Reader he is particularly remembered for his commitment to and work with the children and youngsters. Such was his influence and respect that within two months of his death in August 1930, aged 72, church members decided to install a stained glass window in his memory. A short Dedication Service of this Baptistery window was held prior to the Confirmation Service on Wednesday 9th December 1931 at 8.00 pm with the Bishop of Barking, at which there were over 150 confirmation candidates. 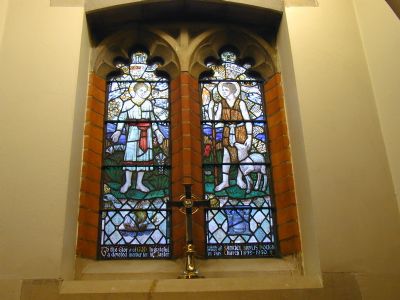 The two figures represent our Lord (on the left) and John the Baptist as children, with a background of flowers and landscape. On the scroll above the head of Jesus are words in Latin which translated mean a little child shall lead them. Below is a ship representing the church. In the corner is a pelican feeding its young with its own blood, symbolism of the Holy Communion. Above the head of John the Baptist (on the right) the Latin means Behold the Lamb of God.  John stands with a sheep. This light also shows a font and a shell, emblems of Baptism. The inscription is a memorial to Samuel Hough a devoted worker for his Master with the dates he served at St. John’s: 1899 – 1930.

Next to the Hough Window are additional memorials (centre window) to two sidesmen who worked alongside Samuel Hough in the early days of St. John’s. The left light depicts the Virgin Mary with the baby Jesus and a lighthouse. This is a memorial to Walter Race who died on 25th November 1907. The right light shows two angels looking over Mary and the Child. There is also a garden and a wall. This is in memory of Andrew Miller who died on 5th January 1908. He had been a founder member of the church and a Sunday School teacher.

The left window of the former baptistery commemorates the 21st Anniversary of the formation of the St. John’s Guides in 1938. The inscription says The weakness of God is stronger than men and the two female figures depicted demonstrate Christian character. The right light shows St. Joan holding a sword and serves as a reminder of courage and dedication to a cause. 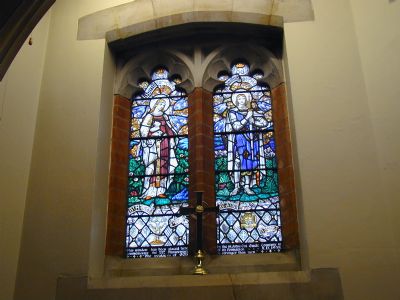 The left light shows St. Agnes carrying a lamb, a symbol of purity. St. Agnes lived during the persecution of Christians led by Diocletian in the early days of the 4th century. She refused to renounce her faith and was martyred aged 13 years. Her life is a reminder that the Christian life is about commitment and following in Christ’s footsteps, which in turn may mean paying the ultimate sacrifice.

To commemorate our centenary in 2004, we installed a new stained glass window in our Worship Area. It is 17.5 sq. metres in area. The theme of its design is Light of the World and offers the viewer a celebration of the Gospel of Christ through a combination of classical and contemporary ideas. The design brings together references from St. John’s Gospel and combines them with specific elements that are particular to St. John’s Church. 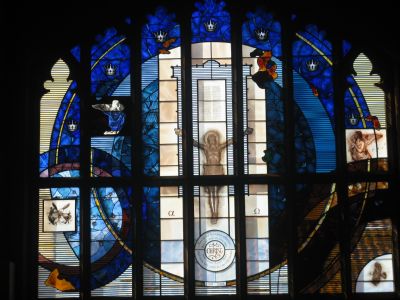 The focal point of the central section contains a folio of the Codex Sinaiticus, showing the last page of the Gospel of John written in Greek. This is one of the early important tenets of the Bible written on vellum dated 4th Century AD.

The circular element plays a very important part of this design, helping to re-affirm the church in the 21st century is reaching out to all nations and all people. The focal point of the design is the central lancet that contains an image of St. John’s Church in simple plan form.

The centre of the window showing Christ crucified is based on the wooden crucifix which stood on the rood screen before this church was redeveloped in 1980. This crucifix can be viewed aloft on entering the church lounge. Below the window’s central design are the symbols Alpha and Omega, representing Christ as the beginning and the end.  Above the main design are seven crowns representing the location of this church in Seven Kings.

The window shows two angels. The left-hand angel is seen with a lily, one of the symbols of St. John. Again, the theme of the lily is repeated in the bottom left-hand lancet with a stylised arrangement of lilies in a circle. The eagle in the bottom right-corner also represents St. John.

The inscription contained in a circle are words by Paul the Apostle: Now we see but a poor reflection; then we shall see face to face. Now I know in part; then I shall know fully, even as I am fully known.  (I Corinthians 13:12 )

The West Window was designed and installed by Derek Hunt, architectural glass artist of Limelight Studios, Leicestershire. (www.limelightstudios.co.uk) The window was installed in January 2005 and dedicated in July the same year.

Derek Hunt at work on the new window. 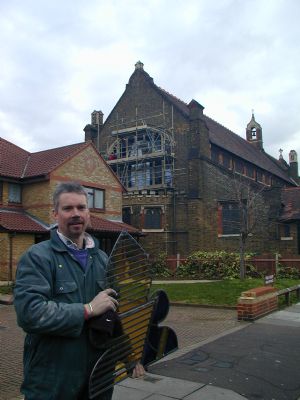